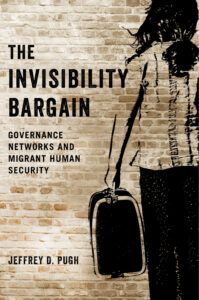 The world is currently struggling with social and political responses to massive refugee and immigration flows that sometimes include discriminatory and xenophobic rhetoric and policies, sanctioned by powerful social institutions and political figures. Much of the existing work on these responses, and the strategies used by migrants to achieve protection, rights, and social integration, focus on industrialized receiving countries in Europe and the United States, even as most migration occurs within the Global South, which also hosts 86% of refugees in the world. In the Global South in general, and Latin America in particular, personal relationships, informal institutions and networks, and non-state actors play an important role as sources of authority, enforcers of social norms, and channels of influence and power.

This book (Oxford University Press, 2021) seeks to understand how migrants negotiate their place in the receiving society, and adapt innovative strategies to coexist peacefully, establish livelihoods, and participate politically given their status as 'guests'. Their acceptance is often contingent on the perception that they contribute economically to the host country while remaining politically and socially invisible. This unwritten expectation, which I call the 'invisibility bargain', produces a vulnerable status in which migrants' visible differences or overt political demands on the state may be met with a hostile backlash from the host society that labels migrants as ungrateful, dangerous, or threatening. In a democratic state, the government has political incentives to prioritize citizens (who vote), not migrants, so the state is not the ideal provider of human security and peace in many migrant-receiving communities. Instead, governance networks, which link non-state actors, international institutions, and the state, form an institutional web that can provide access to rights, resources, and protection for migrants through informal channels that avoid the negative backlash against visible political activism.

This book explores how Ecuador, the largest recipient of refugees in Latin America and a country with traditionally weak state institutions, has nonetheless been able to provide security and promote peace in migrant-receiving areas, and to explain variation across different localities. The book builds on 15 months of fieldwork spanning ten years in Ecuador, funded in part by a Fulbright grant. It draws on more than 170 interviews and an original survey of more than 650 foreign migrants (95% of whom were Colombians) living in six provinces in the northern border zone of Ecuador. It also traces changing political and societal narratives about refugees and migrants by different types of institutional actors through discourse analysis of a database of more than 400 presidential speeches over eight years and content analysis of an original dataset of more than 800 Ecuadorian news media stories related to migration over eight years.

The key finding is that localities with more dense networks composed of more diverse actors (including the state, non-state actors, and international organizations) tend to produce greater peace and human security for the citizens and migrants who live in them than other localities. The theoretical argument travels beyond Ecuador, with implications for migrant-receiving countries throughout the developing world. The book challenges the conventional understanding of the relationship between migration and peace/security, it and provides a fresh approach to the negotiation of authority between state and society in migrant-receiving countries. Its willingness to trace the production of human security through governance networks at multiple levels dismantles the false dichotomy between international and national politics, and it exposes the micro politics of institutional innovation.

Praise for The Invisibility Bargain:

"Understanding what factors ensure that immigrant-receiving nations will be havens for people who flee their homelands is the question for 21st century migration researchers. Jeffrey Pugh's exhaustively researched study of Colombian immigrants living in Ecuador gives us fresh answers. The Invisibility Bargain shatters important assumptions about how countries can offer peace and security to their foreign-born populations and offers rich evidence for the pivotal role played by perceptions of immigrants as bringing value and non-state actor allies who convey and advocate for the interests of those immigrants. Pugh's book is absolutely critical research for anyone working in contemporary migration studies." -- Elizabeth F. Cohen, Professor of Political Science, Syracuse University

"This book offers the most comprehensive analysis of Colombian forced migration in Ecuador to date, showing how particular assemblages of non-state actors, migrant organizations, and local state actors may be the most appropriate response to human security and peace building. In doing so, it offers important clues to understand how forced migrants negotiate their access to rights and protection in states with strong gaps between formal and effective rights." -- Gioconda Herrera, FLACSO Ecuador

"In rescaling the politics of reception, Pugh incorporates actors and processes into the making of politics that others all too often overlook. By providing the framework and theoretical orientation needed to foster global and comparative work, he reinserts questions of migration, conflict, and human security into the centre of contemporary scholarly debate. While his analysis and findings are from Latin America, scholars from elsewhere in the world will find deep resonance with their own work. Indeed, this text is destined to become a reference for discussions of governance and mobility for years to come." -- Loren Landau, Professor of Migration and Development, Universities of Oxford and the Witwatersrand

"Jeffrey Pugh's compact, seminal work is the product of 8 years of fieldwork in the area and living with the people. It shows how numbers of illegal migrants made their way above, below, and around the state through an invisibility bargain, but also alternative strategies or negotiation with civil society on the other side. A thorough, detailed, insightful study of a subject that has so far fallen between the cracks of comparative politics and interstate relations and faces the challenges of researching and analyzing human security with enormous implications for understanding the growing topic of immigration." -- I. William Zartman, Jacob Blaustein Distinguished Professor Emeritus of International Organization and Conflict Resolution, SAIS-Johns Hopkins University